The Rwanda Land Management and Use Authority (RLMUA) has launched a web-based application which allows anyone interested in a plot of land anywhere in the country to check it out by themselves, at any time, as another way to ease business.

Jean-Claude Kayitare, the public relations officer at the Authority, told The New Times that “the rationale of this was to help people, by using the internet, to check by themselves the information about the land; especially those who live outside the country.”

“Of course it is not only for the people outside the country but also for citizens in the country. This web-based application was developed by our IT team.”

It is basically an app that facilitates access to land information.

For efficient use of the system, one has to first be a registered user. According to Kayitare, on one hand, this is a way of controlling or managing, the movements on the platform.

“In brief, it’s for security purposes,” he said.

But if you already have an account, you just sign up and start searching for whatever information you need. And, the system is being improved.

“There are few things to improve; like making it accessible on mobile phones because now you can (only) access it on computers,” the RLMUA tweeted on Thursday, June 18, a day after their initial announcement.

“The mobile version will be released shortly, for now, enjoy the desktop version.”

By using the new Land Information Inquiry Portal, it is noted, its users will be able to see information such as the land address Province, District, Sector, Cell, and Village; the land right type (Emphyteutic lease, freehold, and so on); and land ownership details such as land owner’s name, his or her address and ID.

The new Land Information Inquiry Portal also allows you to easily know the exact restrictions – caveats and, or mortgage status – of the land you are interested in.

You can also know important information to do with the existing land use and planned land use on the master plan; the GIS coordinates (X – Y coordinates); whether there are any ongoing transactions; and the approximate land valuation. 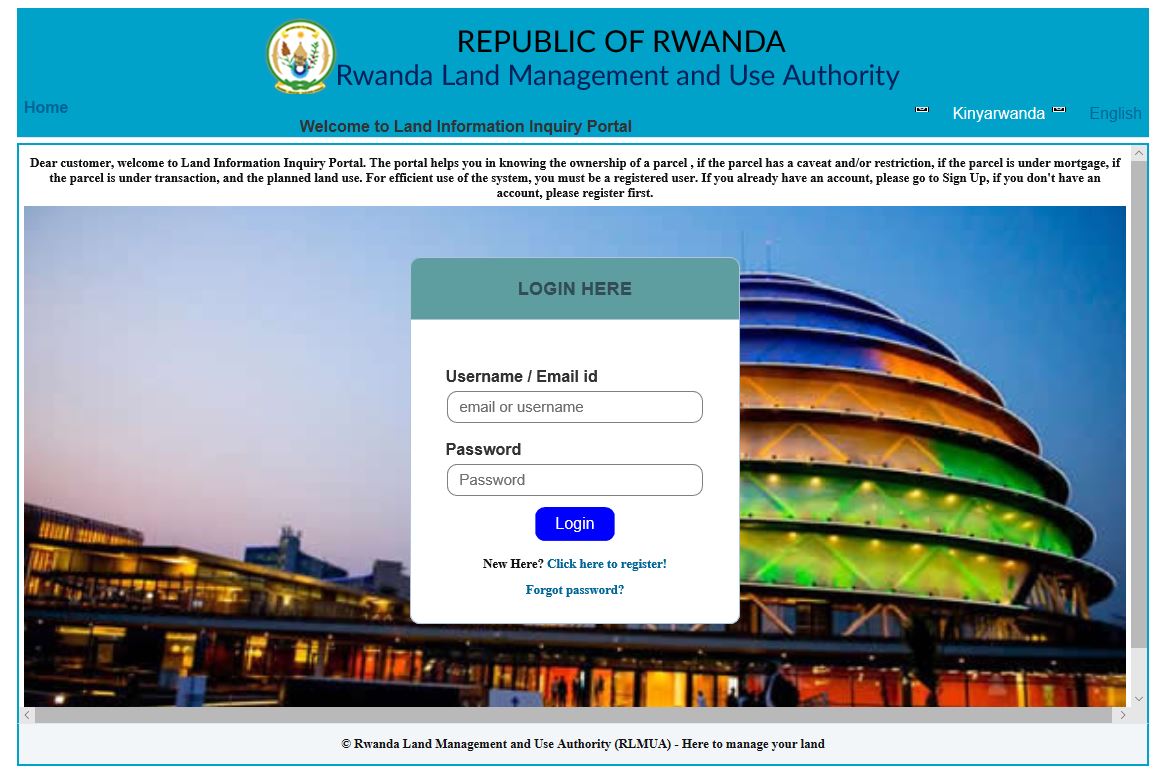 People have welcomed it as an “awesome portal” for the digital easiness of doing business.

Evariste Kagaba, a farmer, told The New Times that it could help him easily get land to expand his garlic project.

“I think this is very helpful. This is really a very good application; especially since I won’t go in blind anymore when bargaining to buy land because that estimated value will help,” an excited Kagaba said.

“I first struggled to log on but now that I know how to go about it. I will get time and do better research. I want to find land in a good location for my farming activities,” he said.

The RLMUA has allayed concerns over privacy violations on the part of landowners whose information will be availed by anyone online.

“We’d like to assure you that privacy will not be violated. Only landowners and those who have interest in a given land with the authorization from the owners will check land Information before making any commitment,” the RLMUA responded to a related query online.